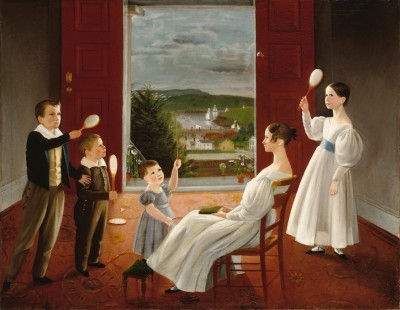 The Children of Nathan Starr, 1835

An itinerant portrait, miniature, and landscape painter, Ambrose Andrews had a wide-ranging career geographically that saw him in many regions including New York (1829-31), Connecticut (1837), Texas (1837-1841) and Louisiana (1841-42). After 1844, he was active in St. Louis, New York City, Buffalo, New York, Vermont and Canada. He was born in West Stockbridge, Massachusetts, and in 1824, attended the National Academy of Design.

Andrews exhibited paintings at the Republic of Texas Capitol in 1837; the Pennsylvania Academy of the Fine Arts, 1848; the National Academy of Design and the American Art Union in 1849; and the Royal Academy of Art in London in 1859. His portrait subjects include Henry Clay and Sam Houston.

His work is in the collection of the New York Historical Society.

Source:
Groce and Wallace, Dictionary of Artist in America, 1564-1860
John and Deborah Powers, Texas Painters, Sculptors, and Graphic Artists
Peter Falk, Who Was Who in American Art