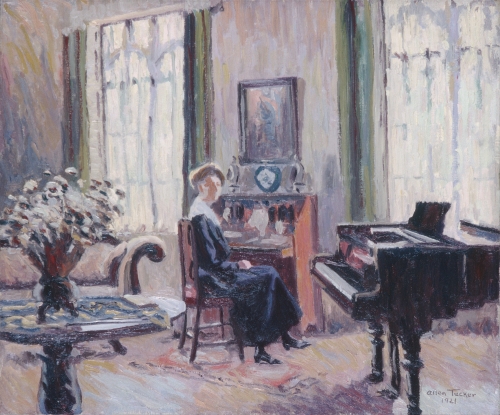 Allen Tucker, was an architect and painter so influenced by Vincent Van Gogh that he was called “Vincent in America”. (Gerdts 291) Robert Henri and Maurice Prendergast were also credited as having an influence on Tucker’s brushwork and compositions, the latter decisively. However, as his painting evolved, he did not fit into any tidy slot for description and was known as an individualist not easily categorized in American art history.

Tucker was born in Brooklyn in 1866 and graduated from the School of Mines of Columbia University with a degree in architecture and took a job as an architectural draftsman in the architectural firm of McIvaine and Tucker, his fathers business. During that time, he studied painting at the Art Students League with Impressionist John H. Twachtman, but it was not until around 1904, when he was 38, that Tucker became a full-time painter, leaving architecture behind. Many of his early canvases were classically Impressionistic with poplar trees resembling those of Van Gogh and haystacks and corn shocks emulating those of Claude Monet. However, he did not hold to his Impressionist style and explored other kinds of abstraction as well as architectural forms.

He became, in 1911, a charter member of the Association of American Painters and Sculptors, the group that would conceive, organize, select the artists and hang the 1913 Armory Show that shocked many persons by introducing abstract art to America. Tucker helped organize the landmark Armory Show of 1913 and in 1919 was also part of the founding the Society of Independent Artists, a group that rebelled against traditionalism.

In 1918, Tucker had his first large one-man show at the Whitney Studio Club (later the Whitney Museum of American Art) and became an advisor to Mrs. Juliana Force, who directed the Whitney Studio and the Whitney Studio Club. He was an Honorary Member of the Art Students’ League, and taught at the League from 1921 to 1928. Tucker also wrote, “Here and There,” a book of verse, 1919; “Design and Idea,” 1930 and “John Henry Twachtman,” 1931. His summers were spent painting in New Mexico, on the New England coast, in the Colorado and Canadian Rockies and in Europe.

His work is in the collections of the Albright-Knox Art Gallery, Buffalo, New York; Art Institute of Chicago; Brooklyn Museum; Metropolitan Museum of Art, New York City; and the Phillips Collection, Washington, D.C.