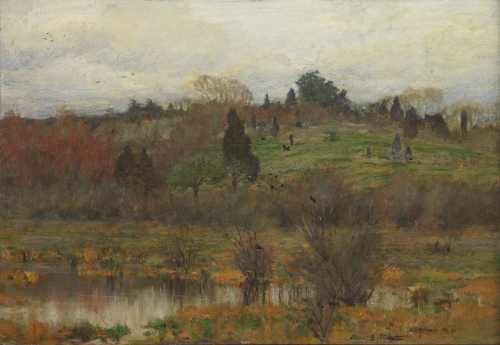 Allen Butler Talcott was an American landscape painter. After studying art in Paris for three years at Académie Julian, he returned to the United States, becoming one of the first members of the Old Lyme Art Colony in Connecticut. His paintings, usually landscapes depicting the local scenery and often executed en plein air, were generally Barbizon and Tonalist, sometimes incorporating elements of Impressionism. He was especially known and respected for his paintings of trees. After eight summers at Old Lyme, he died there at the age of 41.

Talcott was born on April 8, 1867 in Hartford, Connecticut, into an established and prominent New England family. His artistic inclinations were apparent at an early age, as he created sketches of teachers and fellow students in the margins of his grade school books.

He attended Trinity College in Hartford, receiving a diploma in 1890. His formal art education began at the Hartford Art Society, where he studied with painter Dwight William Tryon. He moved to Manhattan while he studied for a short time at the Art Students League of New York. Then he attended Académie Julian in Paris for three years, studying under Jean-Paul Laurens and Benjamin Constant. His work received its first artistic recognition during this period in France, as his paintings were exhibited at the 1893 and 1894 Paris Salons.

Talcott lived in Arles in 1897, renting Vincent van Gogh’s house, along with Frank DuMond. He came home to Hartford, where he set up a studio, which he maintained for a few years. He also returned to New York, joining a cooperative studio complex which had been established by Henry Ward Ranger. Ranger became friends with Talcott, as well as an influence. Ranger was also founder of the Old Lyme Art Colony in Connecticut, and Talcott became one of the first artists to join. When he first arrived in 1901, he stayed at Florence Griswold’s boarding house, which would later be turned into an art museum. He worked in his New York City studio during the winters, and spent his summers at Old Lyme for eight years, until his death there in 1908.

His work is in the permanent collections of the Metropolitan Museum of Art, the Florence Griswold Museum, the Mattatuck Museum, the New Britain Museum of American Art, the Lyman Allyn Art Museum, and the Worcester Art Museum. Talcott was a member of the Salmagundi Club and the Lotos Club, and has work included in the collection of the latter.