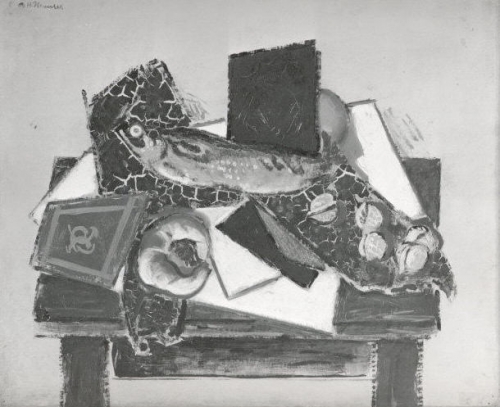 Called the first American modernist painter, Alfred Maurer began as a traditionalist and then explored many styles including Impressionism, Tonalism, Fauvism and Cubism. He developed a rich, brushy, tonal style, influenced by Frans Hals and Diego Velasquez, as well as William Merritt Chase, John Singer Sargent and James Whistler. In 1901, his painting titled “An Arrangement,” done in the rich, impressionist, tonal style of Whistler won first prize at the Carnegie International Exhibition. In the 1920s, he focused on still life and figural pieces, many of them Cubist in style.

He was born in New York City, the son of Louis Maurer who was a commercial artist for Currier & Ives. Young Alfred learned commercial art from working in the same lithographic business as his father. In 1884, he enrolled in the National Academy of Design and in 1897, left for Paris where he stayed until 1914 and studied briefly at the Academie Julian.

Between 1905 and 1907, Maurer abandoned his tonal style, and a promising career as a traditionalist, and developed instead a brilliant Fauvist approach to color and form. His conversion may have been prompted by friendship with Gertrude and Leo Stein. He was using high-keyed colors in place of muted tonalities, strong contracts of color and more simplified, angular schemes of figural representation.

Between 1905 and 1907, Maurer, influenced by his friendship with expatriates and avant-garde focused Gertrude and Leo Stein as well as Henri Matisse and Paul Cezanne, moved away from Tonalism to Fauvism, and for this reason, some have called him the first modernist American painter.

He returned to New York City and circulated among most of the young modernist painters of the city and seemed much influenced by the painting of Marsden Hartley and Arthur Dove. Interestingly he was not of particular interest to Alfred Stieglitz, who prided himself on sponsoring leading-edge artists, but he did exhibit in Stieglitz’ Photo-Secession Gallery in 1909.

Since almost all American artists had left Europe after the outbreak of World War I, the period between 1914 and 1919 was most important for the development of modern art in America. Maurer returned from Europe in 1914 and became friendly with most of the young modernists.

Exhibition venues for him included ones oriented towards modernism such as the Armory Show of 1913, when modernist art was first widely exhibited in America, and the Society of Independent Artists beginning 1917 until his death in 1932. In 1932, he committed suicide, which some attributed to his alienation from popular acceptance and from his stressful relationship with his father who lived to be one-hundred years old and died a few months before his son.