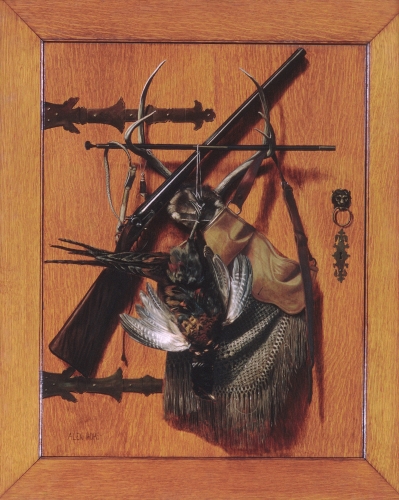 Born in Dorchester, Massachusetts, near Boston, Alexander Pope became known as a society painter who spent his entire life in the Boston area with a major interest in hunting and fishing and painting and sculpting art objects of those subjects. According to Alfred Frankenstein in his book, The Reality of Appearance, Pope was “of the back-slapping, club-going variety who spent his entire life in and around Boston.”

Some of his paintings were trompe l’oeil still lifes with hunting themes and iconography that included deer antlers, canteen, gun, game bag, etc. In this same style, he also painted a lot of dead animal subjects and sometimes live animals, usually in crates.

As a child he worked at his father’s lumber business and carved animals out of wood. He studied briefly with Walter Rimmer, Boston painter and sculptor, but primarily was self taught. In the 1880s, he stopped sculpting and focused on painting still lifes for which he had a strong market.

Biography from the Archives of AskAR