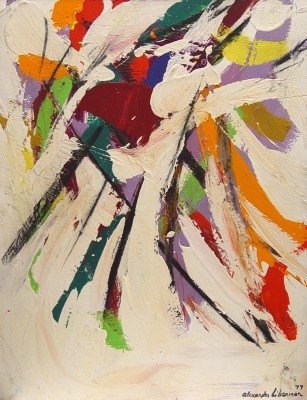 Born in 1912 in Kiev, Russia, Alexander Liberman became an academic and post-Impressionist painter in Europe before moving to the United States in 1941. From that time, he painted and sculpted in abstract styles, often using the circle, which he asserted was the ideal shape. In his sculpture, he was revolutionary because of his use of industrial materials, factory building methods, and large-scale size.

The first nine years of his life, he lived in Kiev with his family where the father was in the lumber business and his mother was devoted to the theatre. The Libermans left Russia in 1921, and Alexander studied in England and France, first in London and then in Paris with Andre Lhote from 1929 to 1931. He studied philosophy and mathematics at the Sorbonne and architecture at Ecole des Beaux-Arts.

In the 1930s, Liberman designed stage sets, and worked briefly with a landscape architect. He earned money by working as an assistant to the poster designer Cassandre, and did editorial and technical work for the magazine Vu, one of the earliest illustrated periodicals and the first magazine to include photographs. Eventually he became managing director, but left the business in 1936 to focus on painting, writing and film making.

In 1940, he escaped with his family to an unoccupied zone in France, and via Spain, the family arrived in New York in 1941. Again he took employment in the publishing business, this time at Vogue magazine. Twenty years later, he became Editorial Director of all the Conde Nast Publications, and he held this job until 1994, when he retired.

He was responsible for much of the leading-edge aspects of the magazine by commissioning work by avant-garde artists such as Joseph Cornell, Salvador Dali, Marc Chagall, and Marcel Duchamp. He had the distinction of being the only publisher allowed to print images of the Matisse chapel in Vence, France, and he used drip paintings by Jackson Pollock as backdrops for fashion shoots.

By the mid-1950s, Liberman had also progressed with his own creative efforts as a painter and photographer and was exhibiting in galleries and museums in New York City. In 1959, he began welding steel, and started making sculpture on a large scale that required industrial machinery and eventually a large staff of assistants to meet the increasing demand for his work. It was said of him, that he emulated the industrialization that he found so impressive in America when he emigrated in 1941.

Liberman died in November, 1999 at the age of 87. His sculptures and paintings are in many collections including the Metropolitan Museum, Museum of Modern Art, Corcoran, Hirshhorn Museum & Sculpture Garden, Solomon R. Guggenheim Museum, the Tate Gallery in London, and the Los Angeles County Museum of Art. In addition, Storm King Art Center has three monumental Liberman sculptures in it’s collection.

Peter Hastings Falk, Editor, Who Was Who in American Art
Glenn Opitz, Dictionary of American Sculptors