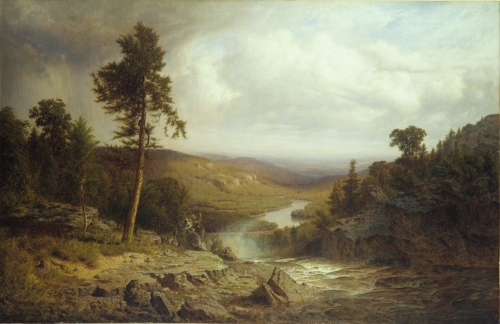 Born in Evans Creek, Ohio, Alexander Wyant was a tonalist landscape and genre painter who was part of the Hudson River School painters but who is credited with making the transition within that School from a tight, restrictive style to the freer methods of Impressionism. He was much influenced by the French Barbizon impressionists, and his signature grandiose eastern mountain landscapes with dramatic cloud formations were much sought after during his lifetime.

He was raised in a family of itinerant farmers and early apprenticed to a harness maker and sign painter. His commitment to becoming an artist resulted from his seeing landscapes by George Inness Sr. in an exhibition in Cincinnati in 1857. He made a trip to New York to meet Inness, who recognizing the young man’s talent, helped him secure to the patronage of Nicholas Longworth of Cincinnati.

This financial help enabled Wyant to study for a year at the National Academy in New York City, where he settled for a short time in 1863. By 1865, he was in Karlsruhe, Germany with Hans Fredrik Gude, a Norwegian artist of the Dusseldorf school. Wyant also lived in England and was much influenced by the landscapes of J.M.W. Turner. In 1867, he returned to New York City where he established a studio and from where he traveled frequently into the Adirondack and Catskill Mountains.

In 1873 he was part of an expedition into New Mexico and Arizona where he painted many sites including Canyon de Chelly in Navajo country. On this trip, he suffered a stroke, which paralyzed his right hand and forced him to paint with his left. It was said that this led to a freer style, lighter tone, and looser technique, all of which paralleled the growing taste of the American public. A critic, Charles Caffin, wrote of his paintings that they were “pregnant with suggestion” and were a “search for the spiritual, poetic side of nature through an expressive simplification of composition and tone.” (Lowrey 180)

In 1889, Alexander Wyant moved to Arkville, New York in the Catskills, and died there three years later, in 1892.

He was a member of the Century Association and the National Academy.

Public collections that include Wyant’s work can be found in the National Museum of American Art, Brooklyn Museum, Metropolitan Museum of Art, Toledo Museum of Art, Tennessee State Museum, and the Kentucky Art Museum.