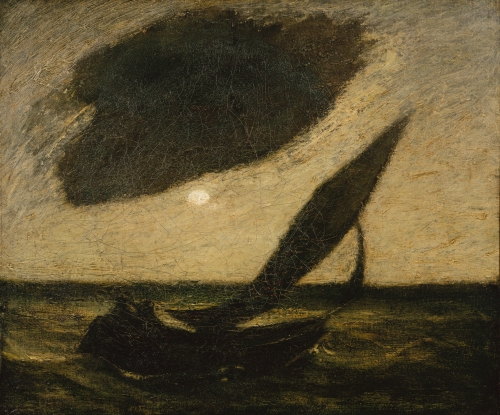 Albert Ryder was born on March 19, 1847 in New Bedford, Massachusetts when it was still a whaling port. He was the youngest of four sons of a fuel dealer. The family moved to New York City when he was twenty-three, and an older brother helped send him to art school. He lived in Greenwich Village and later in a Westside rooming house, where he slept huddled under piles of worn-out overcoats on a floor that was heaped high with yellowing newspapers, empty cans, cheese rinds and mouse-traps with dead mice. He was troubled with weak eyesight and gout, malnutrition and kidney disease. He stayed indoors during the day and at night roamed the streets of Manhattan dressed in tattered clothing.

Ryder is considered by many to be the most eccentric, least prolific, most technically inept, but arguably the most interesting United States’ painter of his time. He painted with an utter disregard for basic techniques. He piled paint layer upon layer, to thicknesses of a quarter of an inch, often returning to work on a canvas while it was still wet. He found it almost impossible to think of a painting as finished, frequently taking back ones he had sold and completely reworking them.

Ryder’s world is full of paradoxes. Widely known as a recluse, he was in touch with the most cosmopolitan circles of his day, even crossing the Atlantic four times. An acute observer of the world around him, he nontheless produced paintings whose distilled forms anticipate modernist abstraction.

Ryder died in Elmhurst, New York on March 28, 1917. Toward the end of his life and after his death, Ryder’s paintings were tampered with and nearly destroyed by some not-so-well-meaning “friends”. The physical evidence today of his creative output is not what his contemporaries saw. Louise Fitzpatrick was Ryder’s only pupil, longtime friend and in his last years of illness, his caretaker. She was an amateur artist who closely echoed his style in her own paintings. There is a report from Philip Evergood that Ryder would ask her to paint on his pictures for him, telling her just what colors to use and how to put them on.