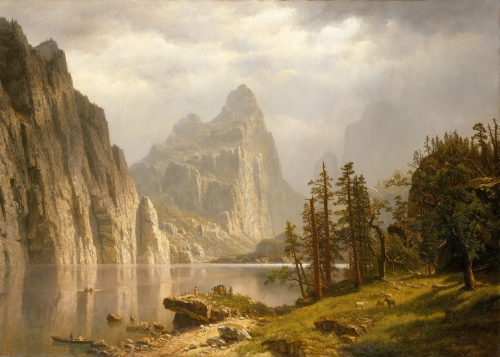 Albert Bierstadt was one of the most flamboyant personalities of the American art world in the second half of the nineteenth century. Combining a flair for showmanship with abundant artistic gifts, Bierstadt produced panoramic views of majestic mountains and cascading waterfalls in the American West that awed and inspired audiences back East. Bierstadt was born on January 7, 1830, in Solingen, Germany (near Düsseldorf) and raised in New Bedford, Massachusetts. The circumstances of his early training are unknown, but by the age of twenty he was exhibiting paintings in New Bedford and Boston. At the age of twenty-three he embarked for Düsseldorf to study at its famous academy. He became friends with the Ohioan Worthington Whittredge and Sanford Gifford, whom he met in the studio of German-American artist Emanuel Leutze, best known for his painting Washington Crossing the Delaware (Metropolitan Museum of Art, New York). After three years of study in Düsseldorf, Bierstadt moved on to Rome, where he remained until 1857 when he returned to New Bedford. Lake Lucerne (1856, collection of Jo Ann and Julian Ganz), which he painted on a summer visit to Switzerland before his return to the States, was the first painting exhibited by Bierstadt at the National Academy of Design in New York.

In 1859 Bierstadt had the opportunity to go West on the Overland Trail with an expedition led by Colonel Frederick W. Lander. The trip, which took him through Kansas and Nebraska territories and as far west as the Rocky Mountains, led Bierstadt to his life’s work. After the expedition Bierstadt settled in New York and took a studio in the newly constructed Tenth Street Studio Building, which offered grand rooms with high ceilings—good for working and well appointed for receiving the public on viewing days. Using sketches and stereographs he had made during his travels, Bierstadt began painting the panoramic western scenes that secured his reputation as one of the nation’s leading landscape painters. Bierstadt visited the West again in 1863, when he saw Yosemite Valley for the first time. During another trip from 1871 to 1873, Bierstadt settled in San Francisco for an extended stay.

Bierstadt’s reputation was secure by the time of the Metropolitan Sanitary Fair, which opened in New York in 1864. He exhibited The Rocky Mountains, Lander’s Peak (Metropolitan Museum of Art, New York), a monumental work dominated by soaring peaks in the background, a loosely defined middle ground, and detailed depiction of an Indian camp in the foreground. This combination of sharp detail and hazy, atmospheric effects is a hallmark of the Düsseldorf School.