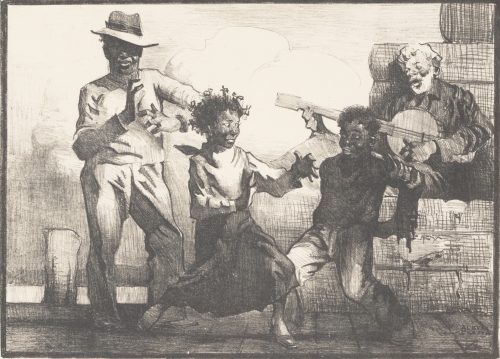 He enlisted in the Army in World War I and saw action overseas while serving in the 807 Pioneer Band. He returned to the National Academy of Design after the war, but soon left again for Paris, attracted by the freedom and lesser degree of racial prejudice he encountered there. For the next twenty years, Smith lived and worked in the Montmartre district. He traveled throughout Europe, studying art in Italy, Spain and Belgium. Earning his living as a musician and cabaret singer, he taught himself how to play the banjo and performed with other Black entertainers on stage in Paris, at La Coupole, and in Rome, and Brussels. During this time he managed to exhibit regularly in Paris and Brussels, and also sent works back to the United States for exhibition and sale.

Smith received extensive training as a printmaker; he may have been the first African-American artist ever to execute an etching.

Smith’s choice of subject matter is fascinating because he worked in several genres. While traveling Europe, he produced etchings, which he exhibited and sold back in the United States. Typically these were images of bridges, churches, and other European landmarks. These works were shown in the New York Public Library in 1921 and 1922, and at the Tanner Art League Exhibition in Washington, DC in 1922, where he won a gold medal. He also produced a number of drawings in the spirit of social activism about the state of race relations in America. They were
regularly reproduced in the magazines of the NAACP and the National Urban League.

Typical of these drawings is a picture of an African-American man with a caption “to the north” with an image of another Negro, a lynch victim, hanging from a tree in the background. Smith also carried out a series of portrait etchings of famous African-American leaders and other positive images of African-American lifestyle. He had found a patron in New York collector and dealer Arthur Schomburg, who ordered
works from Smith for his own collection and for resale. Smith would also do research on art for Schomberg at the Bibliotheque Nationale in Paris, gathering information for him on African-American artists who lived and worked in Europe. Smith also benefited from the support of his father, who actively promoted his works.

Smith was not above producing stereotypical scenes of Negro country life, musicians,
dancer, etc., for wealthy clients searching for images of an imaginary tranquil past where gentile whites were happily served by contented Negroes.

Smith submitted his paintings to the Harmon foundation in New York City, the foundation that was the leading sponsor of African Americans in the arts at the time. Smith felt an acute sense of rivalry with fellow artists such as Archibald Motley Jr., who won a Guggenheim fellowship, Palmer Hayden and Hale Woodruff, both of who won awards from the Harmon Foundation. Smith did win a bronze award from the foundation in 1929.

Smith died in Paris in 1940. In 1990 his atelier surfaced at auction in Paris, and there were many paintings, drawing and etchings. The painting “Cabaret” was among this collection, and this painting is strikingly similar to a photograph of Smith on stage in Brussels in 1932.