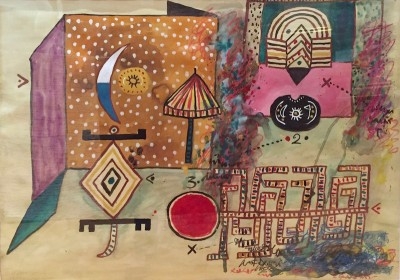 Alan Davie, a Scottish-born painter whose audacious and colorful abstractions put a personal stamp on Pollock-like expressionism and seized on mythical and mystical imagery from cultures around the globe, died on April 5 at his home in Hertfordshire, north of London. He was 93.

His death was confirmed by René Gimpel, whose family-owned gallery in London, Gimpel Fils, represented Mr. Davie for more than 60 years.

Independent-minded, somewhat eccentric and seemingly unaffected by the shifting trends of the art world in the latter half of the 20th century, Mr. Davie was an early European admirer of postwar American abstract artists like Jackson Pollock, Mark Rothko and Willem de Kooning, whom he first encountered at the 1948 Venice Biennale as well as in the collection of Peggy Guggenheim (who bought two of Mr. Davie’s works).

Mr. Davie was a strident stylist whose eclectic influences and bold improvisations had their musical parallels in modern jazz; at one time he made his living as a tenor saxophonist in big bands, and he was also an accomplished pianist.

The work of Pollock and others set him on the path of vigorous, even grandiose experimentation, and as time went on his paintings embraced the symbols and traditions of a variety of far-flung civilizations: Navajo Indian, aboriginal Australian, Celtic, Caribbean, ancient Egyptian.

“His repertoire of shapes is lavish — curlicues, boomerangs, arrowheads, big implacable rectangles and nests of rat’s cradles,” Stuart Preston wrote of Mr. Davie in The New York Times in 1957. “No modern effect, from paint drip to surface elaboration, is alien to his style. All these he knowingly juggles into place, each contributing to massively interrelated and massive compositions, like the various parts, large and small, rococo and classical, of a Baroque facade.”

Mr. Davie, whose work was said to be an influence on David Hockney, was among Britain’s best-known artists in the 1950s and ’60s. But though he never slowed his output (Mr. Gimpel said he continued to paint until a few weeks before his death), he ignored the postmodernist styles that dominated the art scene in the decades thereafter, as his work took on a more transcendental quality — “a sense of mystery and ritual,” as one critic wrote.

A Jungian who believed in the collective unconscious, Mr. Davie regarded himself as a kind of medium or shaman who conducted his images into the world.

He faded from public view in recent decades, but at his death his work was being appreciated anew. A long-planned exhibition of his paintings at the Tate Britain opened shortly after he died, and another is set to begin at the Gimpel gallery in the coming days.

“If you’ve never heard of him I wouldn’t be the least bit surprised,” Mark Hudson, a filmmaker who had known Mr. Davie for decades, wrote in the British newspaper The Telegraph in advance of the Tate exhibition. “The best of Davie stands up beside the best of Moore, Bacon and Freud.

“But perhaps no other major British artist has undergone such a fall from prominence to obscurity. Not that his work was dismissed or derided by the critical establishment. He went on painting and exhibiting, pursuing his own creative preoccupations indifferent to the opinions of the rest of the world, but by the ’70s he had almost disappeared from view.”

James Alan Davie was born on Sept. 28, 1920, in Grangemouth, about halfway between (and slightly north of) Glasgow and Edinburgh. His father was a teacher and a painter. Educated at the Edinburgh College of Art, Mr. Davie served in an artillery regiment during World War II, after which he painted while earning a living as a musician and a jewelry maker.

The key venture in his life, Mr. Gimpel said, was the extended European tour he made with his wife, Janet Gaul, in 1948-49. His first show at the Gimpel gallery — Mr. Gimpel said that his uncle Peter had heard about Mr. Davie from Peggy Guggenheim — was in 1950.

Mr. Davie wore a long beard that in his later years was completely white, making him “quite a biblical-looking figure,” Mr. Gimpel said. In addition to painting and making jewelry in gold and silver, and playing several instruments (including cello, saxophone and piano), Mr. Davie wrote poetry and was enamored of gliding and of certain automobiles. In the 1960s he bought a fiberglass glider and ferried it around England, “towing it behind a huge, ancient porcelain-white Rolls-Royce,” Mr. Gimpel said.

Something of an ascetic, he disdained smoking and, for most of his life, drinking, and wore open-toed shoes the year round. He married Ms. Gaul, also an artist, known as Bili, in 1947. They were rarely apart until her death in 2007.

Mr. Davie is survived by their daughter, Catherine Jane Davie, who is known as Kate, and a grandson.

“It’s an urge, an intensity, a kind of sexual need,” Mr. Davie said about painting in an interview for Mr. Hudson’s article. “I don’t practice painting or drawing as an art, in the sense of artifice, of making an imitation of something. It’s something I do from an inner compulsion, that has to come out.”

Source for the above – New York Times obituary of the artist:
Alan Davie, Painter With a Global Bent, Dies at 93 By BRUCE WEBER, APRIL 16, 2014.