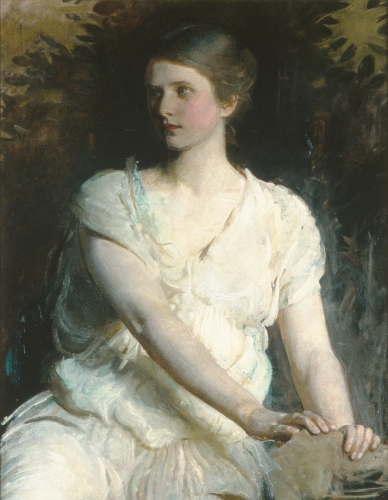 Known primarily for his ethereal angel figures and idealized young women, Abbott Thayer also painted landscapes and delicate florals. Asked to join the Ten American Painters, a rebellion in 1897 of established New York and Boston artists defying traditionalism for Impressionism, he refused because he could not commit to the demands of regular production for exhibitions nor to their needs for organizational skills for which he was noted. His few surviving still lives are Impressionist in style with diffused light.

He had a distinguished career on the East Coast, first in Boston, then upstate New York, and from 1901 in Dublin, New Hampshire. His work evolved from literal to spiritual levels and from realistic to abstract. He also had a lifelong interest in animals’ protective coloration and developed theories of camouflage, first used in World War I.

Thayer was born in Boston to a prominent family and attended the Chauncey Hall School, founded by his grandfather. His art teacher there was Henry Morse from whom he learned to do animal portraits.

From 1867 to 1875, he studied at the Brooklyn Academy of Design with Lemuel Wilmarth, and after marrying Kate Bloede whose father was a distinguished German intellectual, he went to Paris for a year, as a student of Jean Leon Gerome.

In 1879, he opened a studio in Brooklyn in the same building as the studios of Thomas Dewing and Daniel Chester French. He became president of the Society of American Artists but resigned, deciding to move to Cornwall-on-Hudson to raise his family.

For the next decade he lived and painted in the Hudson River Valley. His early portraits were academic and realistic, but became increasingly alluring with young women posed in light dresses against dramatic backgrounds.

In 1890, the mental illness and death of his wife from tuberculosis caused him to paint a series of idealized, angelic women, and from that time he did many psychological studies including self portraits. Her family had introduced him to the romantic world of music and literature, and losing her caused him extreme introspection. He found comfort in transendentalism and the idea of a peaceful, ideal eternity.

In 1901, he moved to Dublin, New Hampshire where he joined a colony of artists and lived at the foot of Mount Monadnock. He maintained a lively correspondence with friends including Samuel Clemens, Theodore Roosevelt, and Charles Lang Freer. He married a long-time friend, Emma Beach, and built a family compound where he painted portraits of friends, meditative views of the mountain, and a series of angels that seemed very human and were symbolic of his family and his need to protect people, animals, and places he loved.

He became a strong advocate of conservation and founded the Thayer Fund, which paid for the establishment of bird sanctuaries throughout the east coast region.

His last years were devoted to painting Mount Monadnock in a variety of personalities, and his style became increasingly abstract. He died on May 29 in Dublin, and his family scattered his ashes on Mount Monadnock.