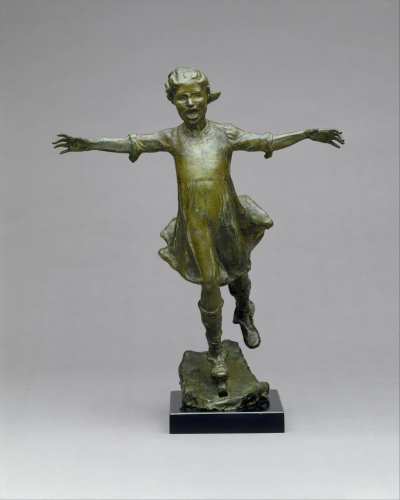 A sculptor of highly realistic figures, Abastenia Eberle was especially focused on children of the Lower East Side of New York City when that part of the city was full of immigrants and of resulting social problems. With the eye of a photojournalist and without sentimentality, she recorded the lives of these people including the plight of immigrant females in a piece titled White Slave. This sculpture was her entry in the New York 1913 Armory Show and shocked people because it showed a girl being sold into white slavery. Other works including The Dance of the Ghetto Children and Roller Skating showed youngsters at play, having spontaneous fun.

Eberle was born in Webster City, Iowa, and was raised primarily in Canton, Ohio where her father was a doctor who took her on house calls including to the home of a sculptor who inspired her career. She first studied with Frank Vogan, a local artist. When she was twenty, she moved with her family to Puerto Rico where she found many subjects during the Spanish-American War in which her father served as a physician.

In 1899, she enrolled in the Art Students League in New York and took classes from sculptor George Barnard. She and successful animal sculptor Anna Vaughn Hyatt shared an apartment and collaborated on some sculpture in which Hyatt did the animals and Eberle the human figures.

In 1908, she moved to Manhattan and began her search on the East Side for slum-life subjects. Eventually she moved into that neighborhood to be closer to the people with whom she was fascinated.

She worked until age sixty when she became too ill to continue her career, and she died four years later in 1942.