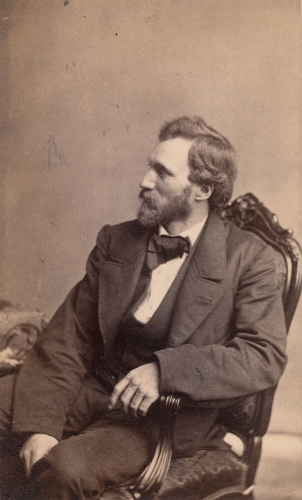 Born in Francestown, New Hampshire, Aaron Shattuck was educated there and in Lowell, Massachusetts. He studied portrait and landscape painting with Alexander Ramson in Boston during 1851 and then moved to New York where he studied at the the National Academy of Design.

In 1856, he was elected an Associate Member of the Academy, and rented space in the now famous Studio Building on West Tenth Street. He exhibited regularly in Boston and New York and was closely associated with John Kensett, John Casilear and Jasper Cropsey. He also had a summer studio in Jackson, New Hampshire.

He was a second-generation Hudson School painter and specialized in scenes of the White Mountains of New Hampshire. Married to the sister of artist Samuel Colman, he was one of the first artists to paint on Monhegan Island in Maine. Many of his paintings are of animals in landscape and are scenes from his farm in Granby, Connecticut.

Shattuck was also an inventor, patenting a special stretcher frame in the 1880s and he made violins. Illness forced him to quit painting about 1885.