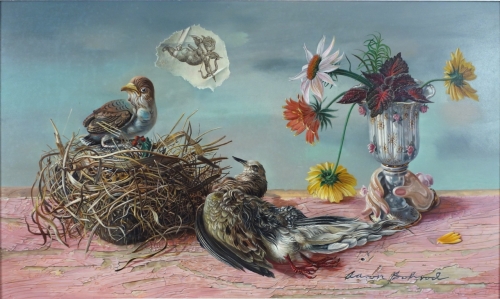 Known for a range of work in watercolor and gouache that included realist figures in cityscapes, landscapes, surrealism, and trompe l’oeil painting, Aaron Bohrod spent his early career in Chicago where he was born on the West Side.

In 1948, he moved to Madison, Wisconsin, where he became a long-time a member of the art faculty and satisfied the inclinations of many artists who leaned towards European-influenced modernism. In this university position, he replaced John Steuart Curry, Regionalist painter from Kansas, who had died. Many artists led by Surrealist Marshall Glasier thought Curry had been provincial and limited in subject matter and style.

In the late 1920′s, Bohrod studied at the Art Institute of Chicago and then went to New York City to attend the Art Students League. He returned to his hometown in 1930 and resided there until the move to Wisconsin.

Influenced strongly by the Social Realism of John Sloan, whom he knew from New York, Bohrod painted city people, utilizing a wide array of styles ranging from a tight, detailed manner to one that was more abstract and sketch like. One of his subjects explored in a series of paintings was the neighborhood where he grew up on the North Side of Chicago. Many of them convey the loneliness and poverty of the Depression years.

He spent some time in the South Pacific during World War II as a war artist and in Europe on assignments from “Life” magazine and from the U.S. Engineers to record the events of World War II in Normandy, Cherbourg, England, Germany and the South Pacific. His completed paintings are in the Pentagon Collection. Following this assignment, he served for one year, 1942 to 1943, as Artist-in-Residence at Southern Illinois University in Carbondale.

In the late 1940′s Bohrod began working with ceramics, which he said influenced him towards surrealism with odd juxtapositions that embraced the style of trompe l’oeil (fool-the-eye). Unlike many surrealists, his work did not have nightmarish undertones. During this period, his painting became increasingly realistic.